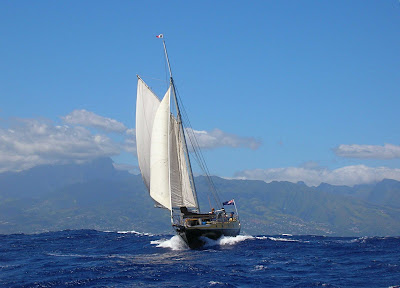 Iron Bark is a 35ft Wylo II steel gaff cutter, designed by Nick Skeates and built by me, Trevor Robertson. Since she was launched in 1997 Iron Bark has spent quite a bit of time poking around in the higher latitudes sometimes with Annie Hill and Trevor Robertson as crew, sometimes with Trevor alone. Iron Bark has spent winters frozen in the ice of Antarctica and also Greenland and I believe she may be the only vessel to have ever wintered unsupported in both Antarctica and the high Arctic. Annie has written a lot about Barky’s journeys some which is posted on www.anniehill.blogspot.com. Annie is the author of Voyaging on a Small Income, which every sailor should read and re-read every few years for inspiration and the sheer joy of it.

Annie has also posted pilotage data and sketch charts for some interesting high latitude cruising grounds on www.annie-hill.blogspot.com. These were collected by Pete Hill and Annie when they were sailing together prior to 1998 and some by Trevor Robertson and Annie since then. Some more recent pilotage data for Chile, Falklands and the Canadian maritimes is posted here mixed in with the postings on voyages.

I am an Australian, born 1949 and have been sailing since I was in my 20's whenever I had a boat and the price of provisions. In 1976 I sailed from Western Australia in a thirty-four foot wood sloop to east Africa via Rodriguez, Mauritius and the Seychelles (and was there for both independence and the first coup), thence around the Cape of Good Hope to Brazil and the West Indies, where I was wrecked in 1978. I worked in the yacht charter business in the Caribbean for a couple of years then went back to working on oil rigs to earn enough money for another boat.

That boat was Salvation Jane, 30ft IOR half tonner of the type popular as club racers in the 1970’s. I bought her in Fremantle, Western Australia, in run down condition, rebuilt her, renamed her and did a Trade Winds circumnavigation between 1985 and 1991. I named  her after an introduced weed in Australia . Salvation Jane, or Patterson's Curse as it is more commonly known, turns the paddocks a lovely purple when in flower. It is not poisonous but apparently has no nutritional value and stock avoid it unless starving but makes excellent honey. The farmers do not love it but the apiarist do. I called her Salvation Jane because, like the plant, she was pretty but pretty useless and mostly harmless. I reckoned calling her Patterson’s Curse was going to cause more trouble with customs authorities than it was worth, so Salvation Jane she became.

Salvation Jane was cheap to buy and cheap to run and could carry three months provisions for two people,and little else, so there was no temptation to spend money on trivia. Her anchor gear was good as it needed to be in an essentially engineless vessel. I once anchored in 39 fathoms when the wind failed and the tide threatened to carry her on a reef in the Bonaparte Archipelago in northern Australia. She did not have a windlass so it took a while to get the anchor up on that occasion.

Salvation Jane sailed like a dinghy so I seldom bothered to mount her engine, a 15 hp kerosene outboard. The downside of sailing like a dinghy was her lack of directional stability and lively motion. She did everything except put her head between her hind legs while trying to buck me off the foredeck. She had a vestigial main and five hanked headsails like many of those silly IOR-type vessels, so there was a lot of foredeck, work.

She only took one bad knockdown in the circumnavigation, off the South Island of New Zealand, which left her with a stove portlight and half full of water. At least the water swilling over the bunks was not oily, which it would have been if she had an inboard engine. Other incidents of note were being caught in the crossfire of a political disagreement in South Yemen and being struck by lightning off Malta. For months after the Yemen incident she bled rust for months from shrapnel embedded in the topsides until I dug it all out and puttied her up. The lightning strike fried the electrical system but as that consisted of two cabin lights, a masthead tricolour and an echo sounder, was not hard to fix.

I sold Salvation Jane  on my return to Fremantle and put the proceeds towards the building fund for the next boat, Iron Bark. For all her faults Salvation Jane was a happy ship, and a lucky one, as is her successor, Iron Bark, also named for Australian flora.